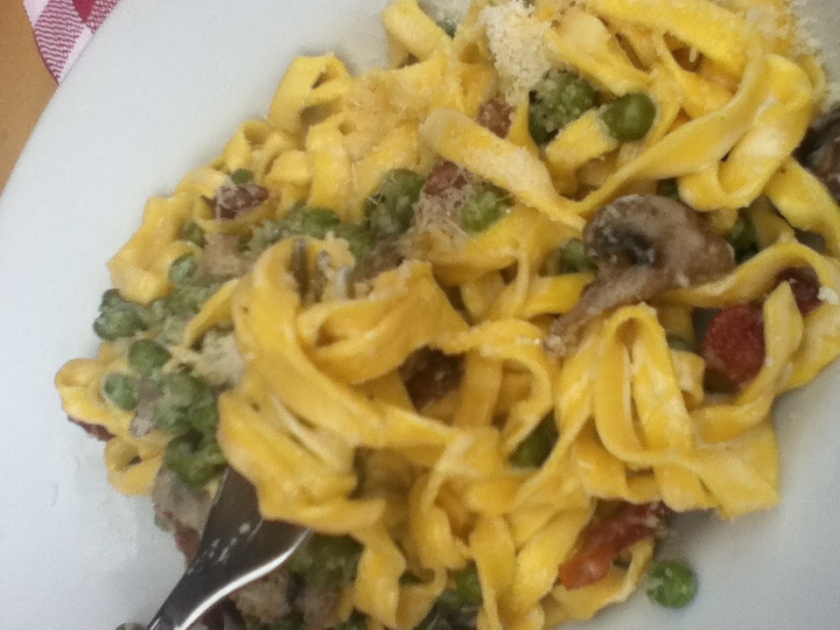 Travelling alone means eating alone, something I had not considered. It’s all well and good to go get something from a food stand and eat it as you walk, but actually sitting down in a restaurant, all alone, seems an unimaginable terror, one that I had to encounter many times over the course of my travels.

My first meal alone was in Rome. It was my second day there and I was still getting over the jitters that I was in fact doing this alone. It had been a rather successful day for me – I had went around and done a lot, all without too many line-ups bogging me down, but now it was dinnertime and I was starving. I knew I would have to face my fears about eating in a restaurant alone eventually, and I knew that sooner would be better than later if I wanted to experience some legit Italian food, which both my mind and my stomach definitely wanted. So I put my brave face on and marched myself to Campo de Fiori (which, despite its name, had a disappointing lack of flowers in it). I chose a restaurant at random after studying the menu boards outside several different patios and was seated by a very happy waiter on the edge of the restaurant’s patio looking out into the busy square. So far so good. I had survived five minutes of sitting alone and hadn’t yet burst into the flames of embarrassment. I ordered my food and gazed out at all the people passing me by and it was then that I realised something. Nobody was paying attention to me. Nobody was sniggering over the fact that I was alone. I was in Europe, I told myself, people travel alone here all the time and nobody cares. You can be one of those whimsical people too. You can do this, heck you ARE doing this! You are Superwoman. And then I felt better. I relaxed into my chair, enjoyed the view, and when my food came, devoured the deliciousness that was fresh pasta with peas, mushrooms, and bacon in a cream sauce. And I was content ever after eating alone.

Of course, I didn’t always have to eat alone. You meet people as you go, share a meal with a few of them. I feasted most of my way through Vienna with the two groups of girls I had met there, shared a meal or two with tour mates in England and Amsterdam, I even got a couple of home cooked meals in Venice. Those were a nice change of pace from the solo meals, but the more time I spent alone, eating or whatever else I happened to be doing, the more I got used to it and the more comfortable I became. I grew into somebody who could not only have a pleasant meal alone in a crowded restaurant, but someone who was exploring castles and museums on her own, almost getting stranded at train stations on her own, being attacked by stinging nettle on her own, and enjoying herself completely on her own! It was incredible, and I really do think it came down to that first meal alone in Rome. It gave me the confidence to do everything that I did for the rest of my trip. I’m not saying I wouldn’t have enjoyed myself if I had been accompanied by someone else, I would have loved to have had a friend with me, but I do think I would have experienced the trip differently. I don’t think I would have grown as much. I went from hating that I had decided to tour Europe by myself to being the happiest and most content I had been for a very long time. Travelling alone is a special thing. It may not be for everyone, but I think everyone should try it at least once in their lives. You’ll learn things about yourself you never dreamed possible. If someone as terrified of doing things alone can travel by myself, truly anyone can. I have absolutely no regrets, and, if given the chance, I would definitely do it again.

Signing off, travel bugs, until next time =)