My second day spent in Salzburg was just as amazing as the first. I was in for a splash in a trickster’s castle, found a great view, and tripped down an eleventh century staircase. Just another day on my travelling extravaganza. A wonderful, wonderful day.

I began my day by getting my own personal tour of the city. I signed up for a morning city tour and it just so happened that nobody else did that day, so it was just me and the tour guide, which was actually pretty cool because then she was able to tailor the tour strictly to the stuff I was interested in. I chose this particular tour (with Panorama Tours, the same company I did the Sound of Music and salt mine tour with) because it ended at Schloss Hellbrunn, so I would be able to see that on my own, and it came with a 24 hour pass that I could use for transit and great discounts at practically every attraction in the city. It was a pretty sweet deal. Schloss Hellbrunn is just outside of the main city, so it was helpful to be dropped off there as well. Coming back wasn’t going to be the problem, it would have been finding it in the first place that would have gotten me lost.

Once there, I walked around the grounds for a bit. 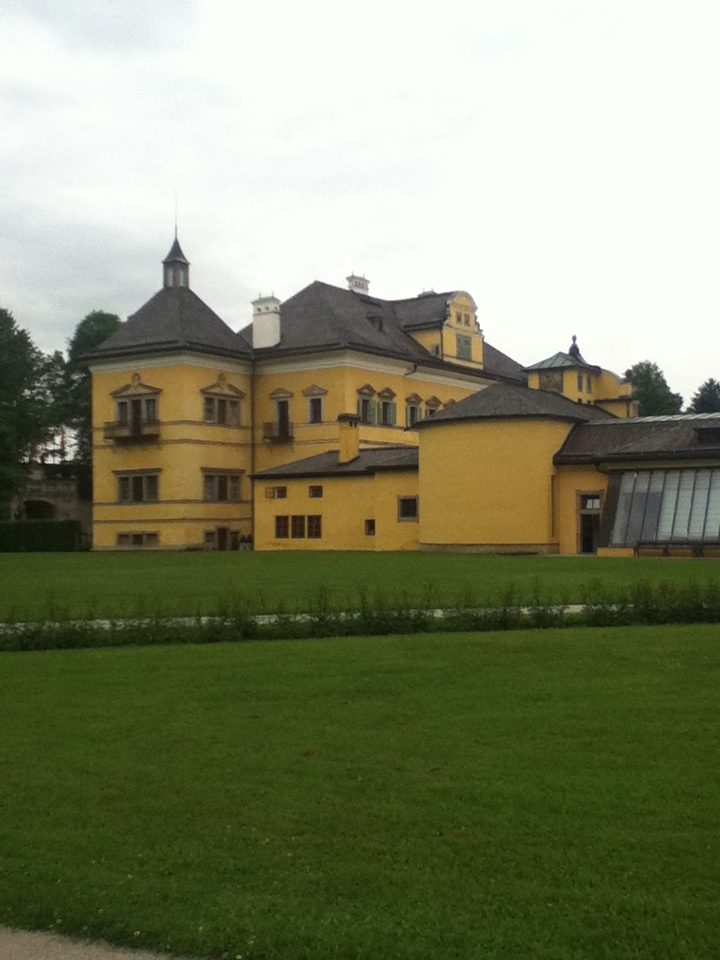 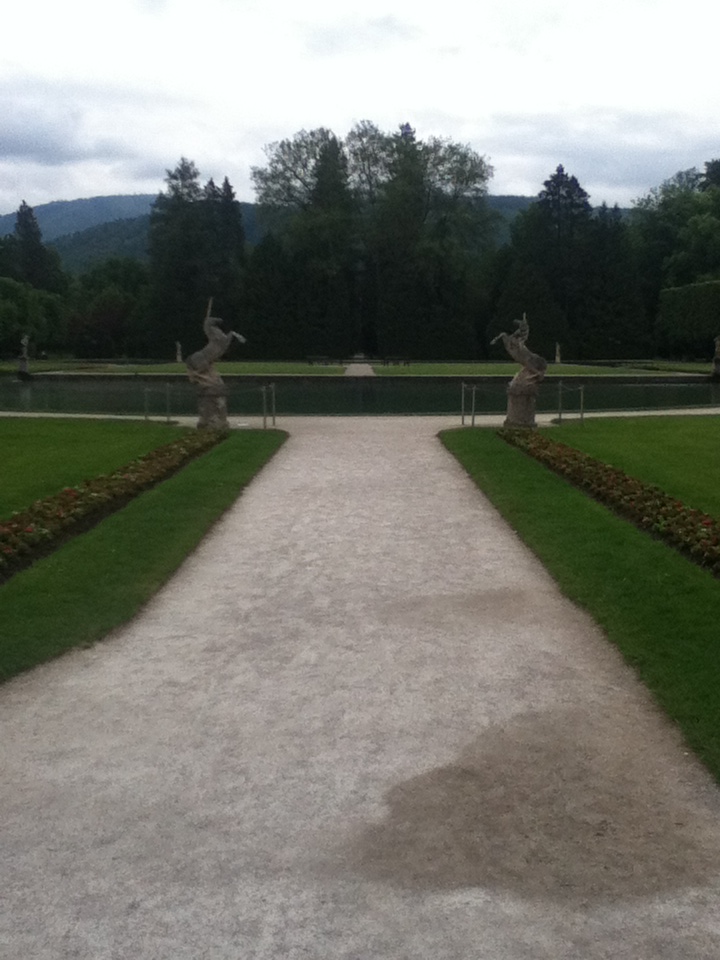 The guy who had Hellbrunn built was Markus Sittikus von Hehenems, who was the prince-archbishop of Salzburg in the early seventeenth century. He was quite the jokester, that man. He had the whole place painted yellow, as having coloured paint, especially yellow, showed people that you had a lot of wealth. Along with Hellbrunn, he had a mini palace built up on the hill, pictured here:

He bet the architect working on Hellbrunn that he could finish a palace before he finished his own building, which was scheduled to be finished in a month. The architect took the bet, thinking there was no way he could have an entire palace finished in less than a month. Then Markus built what you see in the picture, finishing it well before the month was up (he had never said it was going to be a big palace). Wise guy. This building can be seen from the fortress in Salzburg as well, from the watch tower. Markus would bring people up and point out his huge palace to them to impress them, saying the rest of it was just being blocked by the trees (and then subsequently never take them to it, as it was in fact just a tiny room).

Along with tricking people about palaces, the prince-archbishop also loved fooling them at the dinner table and in his gardens, and I got to experience this on my tour of the Wasserspiele (trick fountains).

If you’re going to visit the water gardens at Hellbrunn (which I highly recommend, as they were a lot of fun), prepare to get wet.

First we got to see Markus’ stone custom dining table. As I’ve said, Markus was a bit of a trickster. He had holes drilled into the seats and connected to a water pump. He would wine and dine his guests, then at some point during the party he would give a signal to a servant to turn the water on and out it would spurt from the holes in the seats. Sometimes it would just be a little, so people, due to their drunkenness, might think they’ve had a little accident. Other times it would get turned on full stream and the water would shoot out, soaking their behinds. No one was allowed to stand in the presence of a seated archbishop, so everyone just had to sit and bear it, getting wetter and wetter. Nice guy, huh? Conveniently, his chair was the only one without a hole in it.

We got to see the table in action (luckily we didn’t have to sit at it). 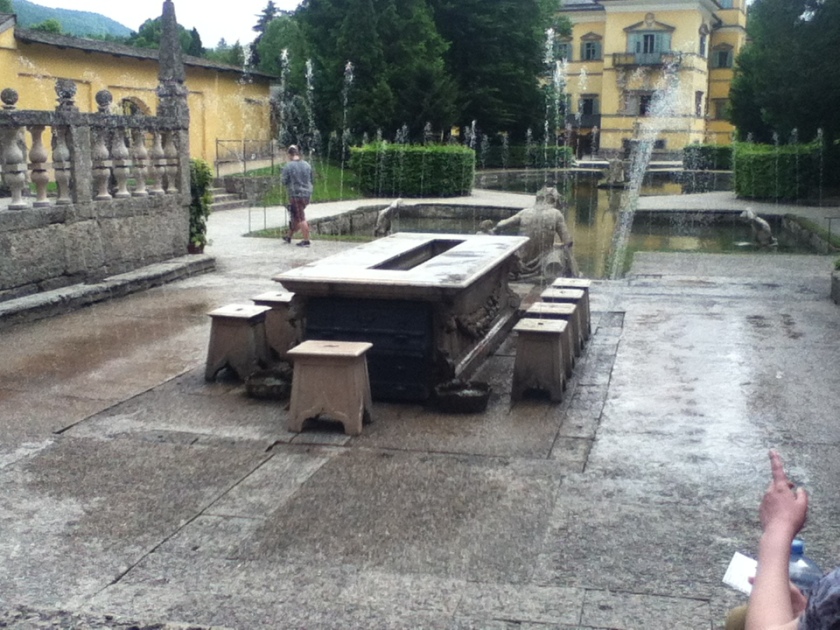 The water gardens were full of neat things like that. There were lots of grottos nestled here and there, with statues and art work and some sort of water feature. Water was the power behind the garden – it would push figurines around, shoot objects into the air, power little mechanical scenes from Roman mythology and whatnot. My favourite were the big faces that would open their mouths, sticking out their tongues and spitting out water as their eyes rolled back. Hilarious. I walked through water archways and got sprayed by water coming out of bushes and deer heads and pretty much everything else. It was a rather wet tour, but it was so much fun, and a really cool thing to experience. 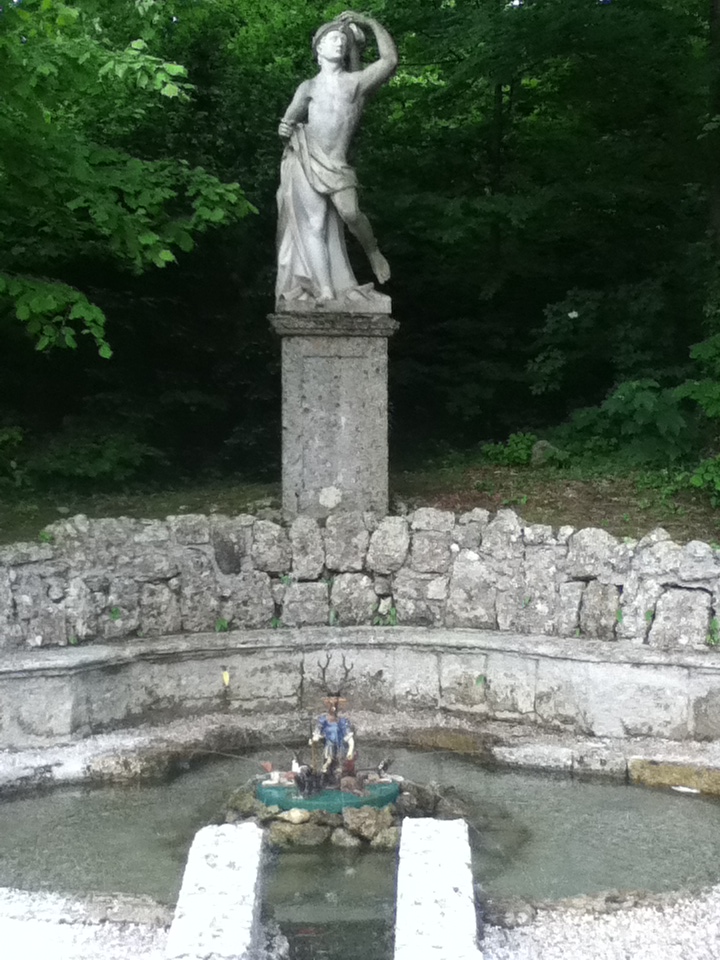 I of course went through the house afterwards, and saw the man behind it all: 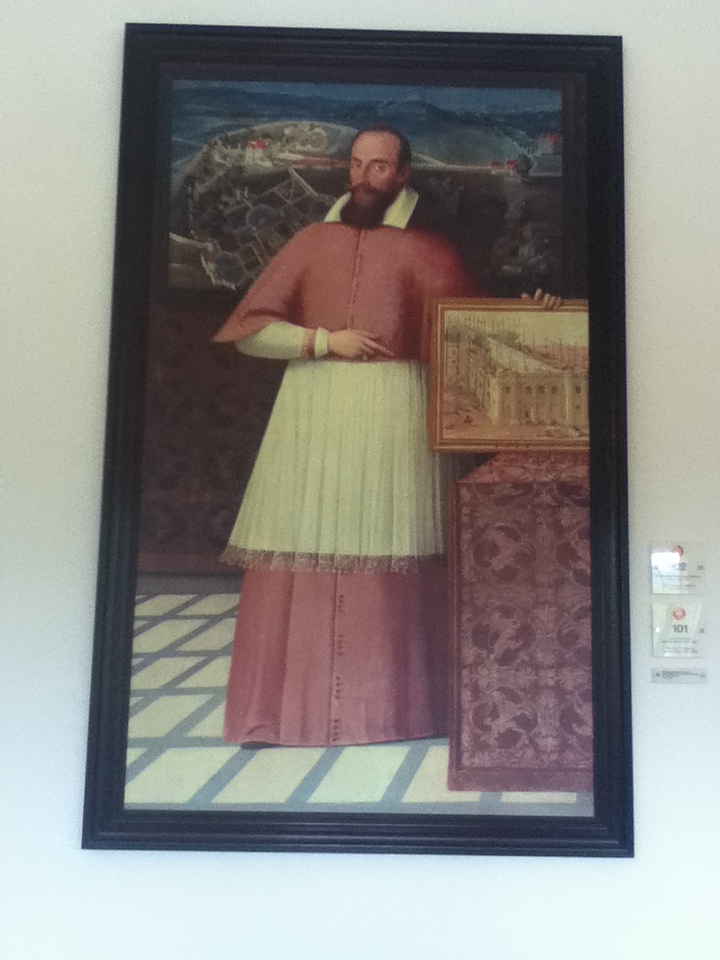 Here’s a close-up of one of the water heads. Just imagine it opening its mouth wide, sticking out a pointy tongue and rolling its eyes back as water pours from its mouth.

I headed back into town then and went to the modern art museum, not for the museum itself, but for the view. I rode an elevator up inside a mountain (thanks to my pass, it was free). Up there is the museum, which I didn’t visit, and the view I had come to see. It was wonderful to see Salzburg from above, and trace out the streets I had walked down only recently. (The fortress of course gives a great bird’s eye view too, but from here you get to see the fortress along with the rest of Salzburg.) 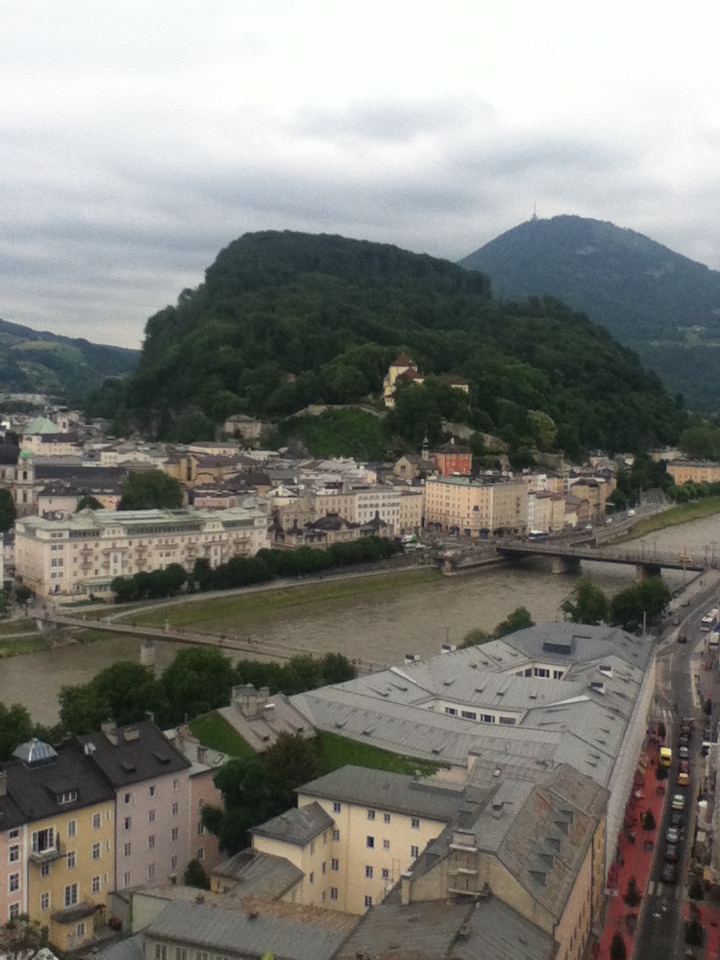 Then it was off to the fortress! Hohensalzburg is one of the oldest fortresses in Europe that is still completely intact today. It was built in 1077 and is a sight to see up on its mountain.

I had a blast trampling around the fortress, getting a little over excited in areas, which is no doubt why I managed to not-so-discreetly lose my balance on a certain staircase and bang my arm against the stone wall. Adventure bumps – worth it every time. It too had great views of the city, especially up in the watch tower. 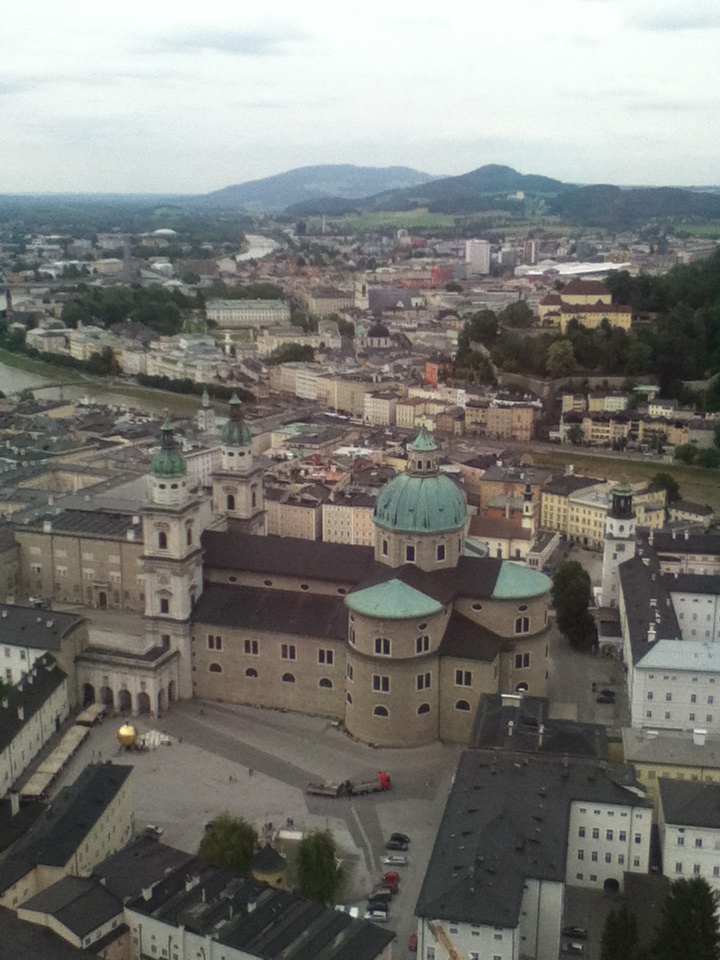 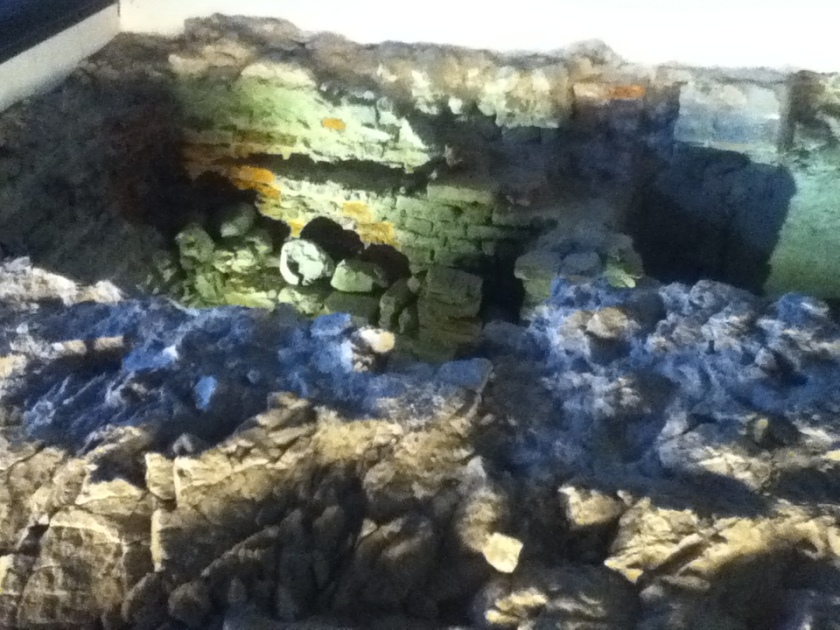 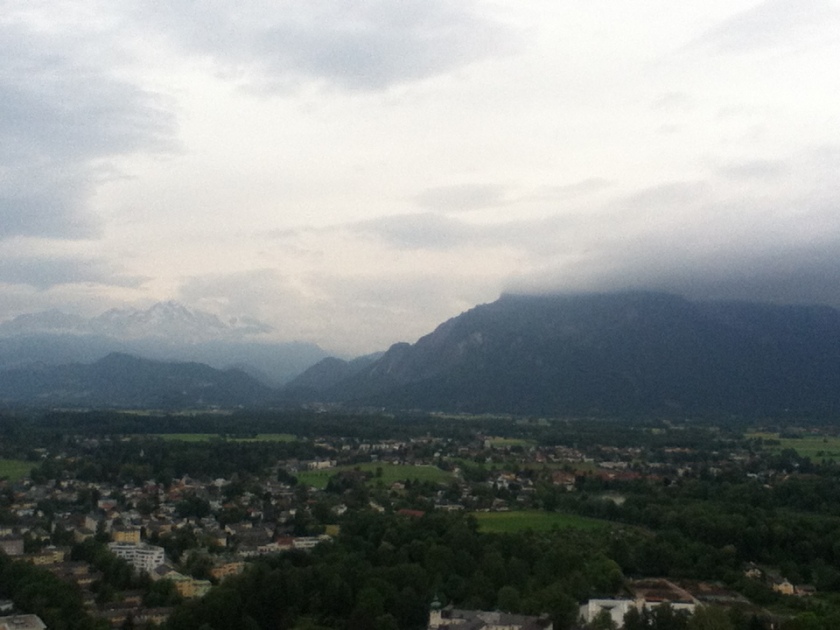 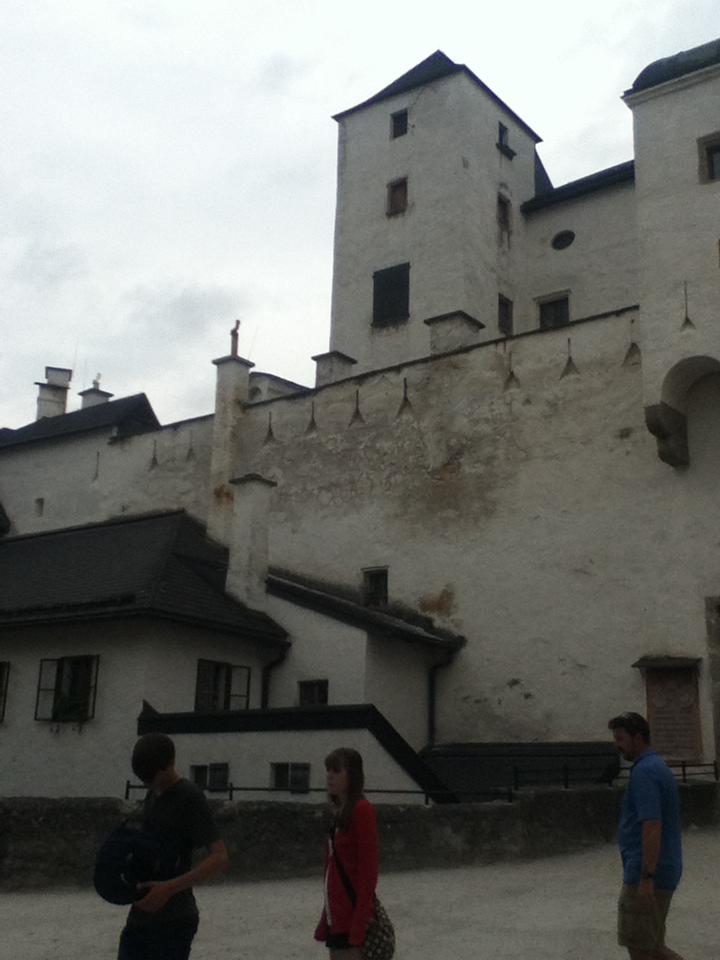 And that was it for day two of Salzburg! Great times all around!

Signing off now travel bugs, see you next time for Salzburg day three!