When planning out my trip, Vienna was a sort of last minute addition, just so I could get another place into my grand adventure. I didn’t know much about the city when I added it to my agenda, but I did some poking around for stuff to do and by the time my train arrived in Vienna, I was super pumped over my decision. Vienna turned out to be a major highlight of my trip, and if you get the chance to go, take it, take it like you’ve never taken anything before!

Day 1 began with a visit to the Imperial Palace, otherwise known as the Hofburg. This is where Marie-Antoinette was born. Just saying. And while my near-favourite queen was a draw to this magnificent city, she was not the focus of my visit (although I did spend quite some time hobbling around a museum looking for the last portrait of her, but that’s a tale for another day). In fact, my search for all things Marie-Antoinette in her birthplace led me to another grand royal I couldn’t resist adding to my list of favourites, so fascinating that she was – the imperial Empress of Austria and Queen of Hungary Elisabeth Habsburg.

The Hofburg has a museum dedicated to her and her life, that’s how fascinating she is. By the end of my romp through the museum, I was fully hooked and I needed to learn more, so I bought her biography from the gift shop and settled down to 374 pages of absolute wonderment. (My copy is “The Reluctant Empress” by Brigitte Hamann, an excellent read, if anyone’s interested.)

When first entering the Hofburg, you will find yourself in a series of rooms that are filled with silverware and dishware, along with other decorative bibs and bobs, all used by the imperial courts from the 18th and 19th centuries. I was pleased to find a miniature bust of Marie-Antoinette here. 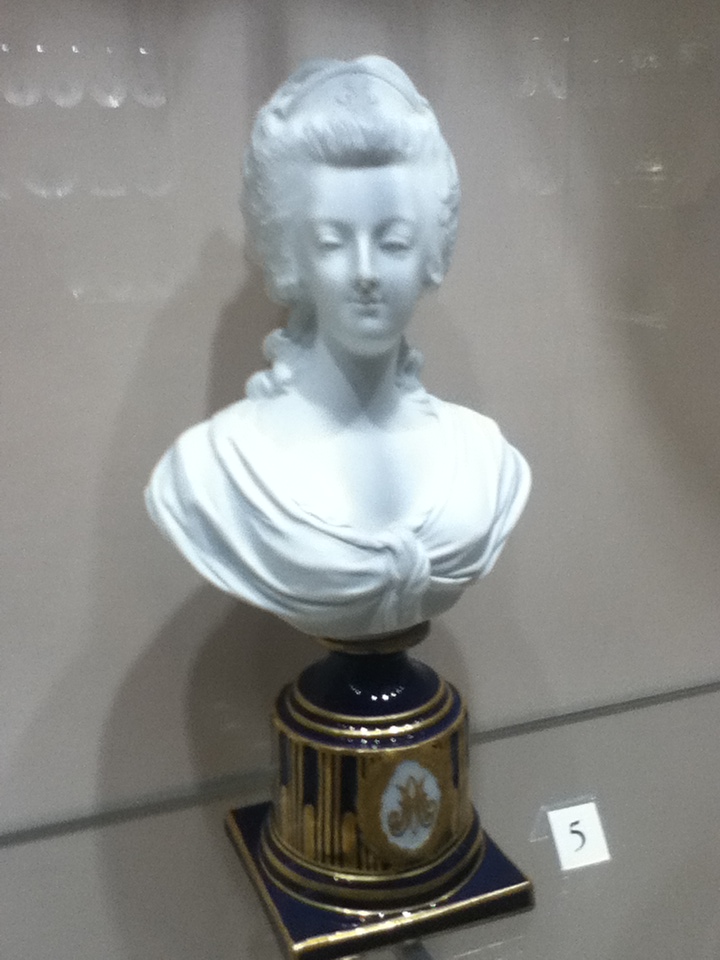 These rooms are quite extensive and there are plates and glasses and golden candelabras galore, room after room after room filled with dining accessories. It’s nice to have a look around, especially if you’re super into that sort of thing, but I’m not really, and I was itching to head upstairs to the imperial room set-ups. 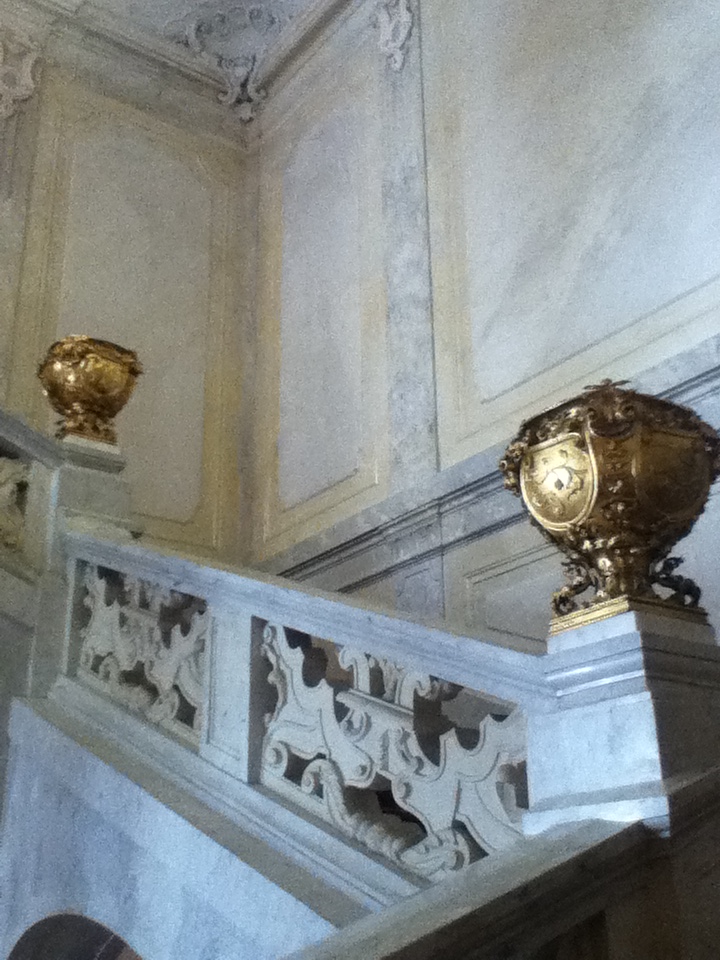 And this is where my love for the Empress Elisabeth, or Sisi, began. Once upstairs, you will first go into the Sisi Museum, which has many things from her life, both real and replicas, on display.

The only problem with the Hofburg (and this was the case for all the palaces I visited in Vienna) was that no photos were allowed in the museum or in the imperial apartments, which is such a shame, especially in the case of the imperial apartments which were so gorgeous. So I won’t have many photos to share with you, save for the few that I couldn’t help but sneak (hey, everyone else was doing it!). All the more reason for you to go and see it all for yourself! Because it truly is breathtaking, everything that I was so lucky as to see.

I wandered around the Sisi Museum in an absolute daze, eyes gaping at everything I was taking in. First of all, she was gorgeous, her portraits were dazzling, especially her best known one of her in a silver dress and star-diamonds in her hair.

Second of all, she was tiny! She had the smallest waist I think I’ve ever seen, but she was also quite tall, and so she was plagued by health problems all her life. She was also extremely vain (photographs of her are rare, as she often wouldn’t allow them taken of her) and she was terrified of losing her looks, leading people now to say she was likely anorexic. Her hair went down to her ankles and for 2-3 hours every day she would have to sit while people dressed it, even longer on days she needed an intricate hairstyle. The process of washing it took an entire day. Holy Habsburg!

Some of her dresses were on display, and I just about fainted at the sight of them. They were so unbelievably exquisite. The first two were replicas, as the originals have long since deteriorated, but some that came later were the real deal, holy cow!

Her coronation dress was reportedly so heavy she couldn’t even make it through the whole evening in it, and the combination of her hair and the crown she wore was so much she could barely hold her head up.

The Empress Elisabeth was not raised to be empress. It was originally supposed to be her older sister Helene, but the second the Emperor Franz Joseph saw Sisi, he fell in love and it was she that he married. This lack of preparedness in her, among many other factors, led her into an unfamiliar life which slowly ebbed her into a great depression. On September 10th, 1898 her suffering ended in the form of assassination.

The Empress was assassinated by Luigi Luccheni just as she was leaving Geneva. The original target, Prince Henri of Orleans, was absent, so Luccheni turned instead to the Empress, whom he attacked on her way to her departure steamer. His weapon of choice was a nail file, which he plunged directly into her heart. Because of its size, nobody at first knew what had happened, thinking Luccheni was just a maniac who had knocked her down. The Empress herself thought he was after her watch. She got back on her feet after that and made it to the ship. On deck, however Luccheni’s attack took hold. She collapsed. Still not making the connection, people thought her corset was too tight. It wasn’t until they had removed enough layers that they saw the pinprick of blood seeping through, and by then it was too late. When the Emperor heard the news, he said “You do not know how much I loved this woman.” And that was the moment my heart broke, standing in the corridor, listening to my little audio tour. The romantic in me instantly fell for the Emperor and Empress, imperfect as they were.

They had the nail file on display as well, which was incredibly eerie to look at. The room was dark, but the file definitely looked stained.

I could go on and on with my fascinations over the Empress Elisabeth, but I’d best move on.

Once out of the Sisi Museum, it was into the Imperial Apartments, rooms set up as they would have been during the time of the Emperor Franz and Empress Elisabeth. Again, no pictures were allowed, and this area was much better watched, so I was unable to sneak any. Which is an absolute shame, because as I’ve said, they were beyond impressive. There were bedrooms and studies and dressing rooms, dining rooms, salons, all the rooms you could ever need and then some.

My visit to the Hofburg was magnificent, unforgettable. I learnt a lot, cried a little (not really, but I could have), and I left knowing that I had made my best trip decision thus far choosing to add Vienna to journey, and I would continue feeling this all throughout my days in this imperial city.

Signing off now travel bugs, till next time ♥ 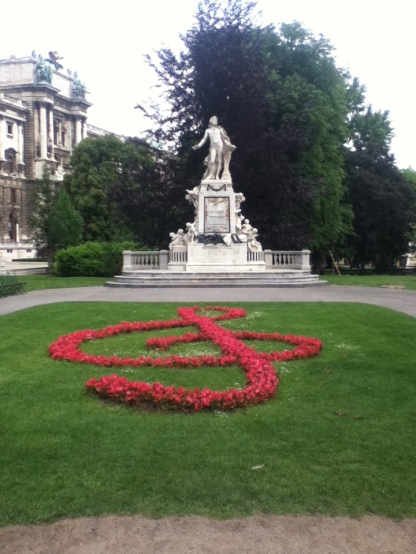 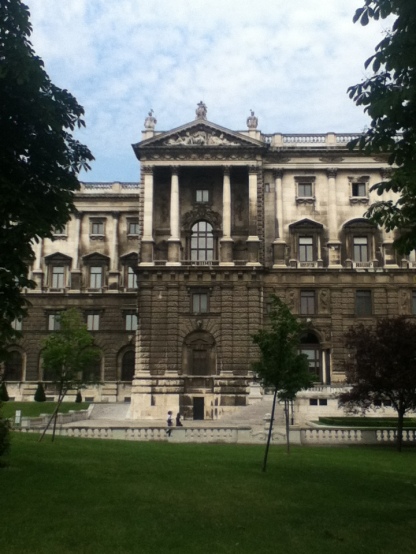 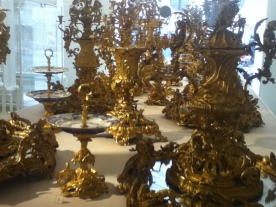 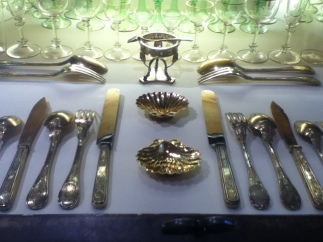