My twelfth day in London I decided it was high time to get to know the city a little more intimately. I decided to take another Sandemans tour, a company I had the pleasure of getting to know in Barcelona and Amsterdam. Just like in those cities, I opted for their free walking tour in London, and once again Sandemans blew me away.

The meeting point for the tour was in Covent Garden, and while we waited there, a celebration in the sky was taking place! The day I chose to take the tour was the day the city was celebrating the Queen’s birthday. Overhead, jets were flying, doing fancy tricks, whirls, and twirls. At one point, nine planes flew by in a V formation, trailing a rainbow of jet streams behind them. 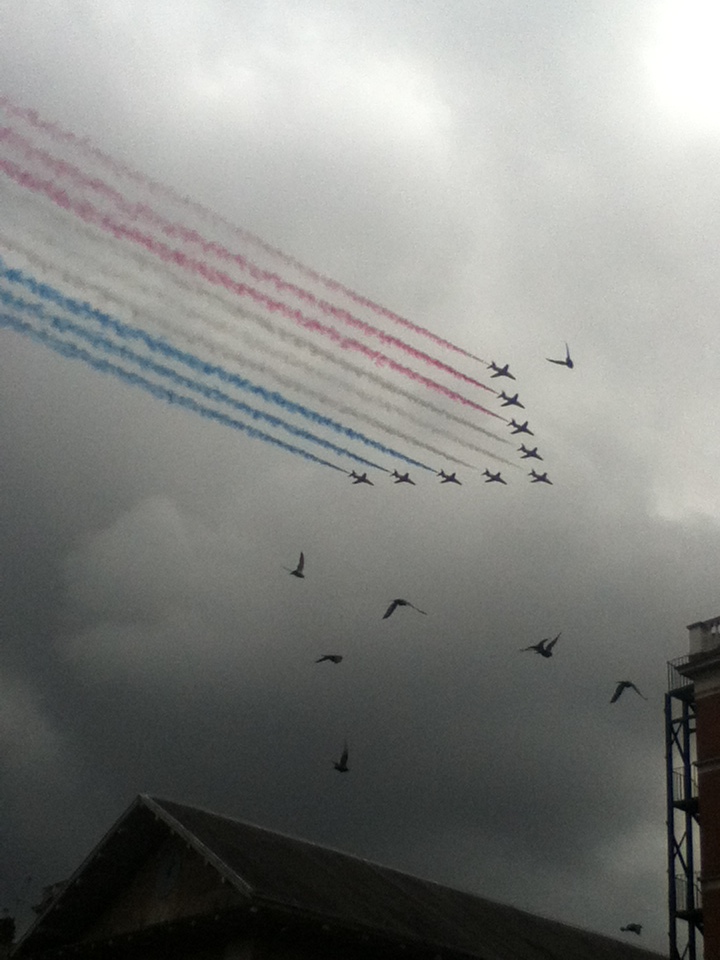 It was a cool thing to get to watch while we waited.

It didn’t take long for me to have a complete adoration for our tour guide, Chris. He had great stories to tell, funny and informative, and his accent was honey to the ears. I was on the tour with a friend of my dad’s, who’s lived in London for quite some time, and he said even he learned things he’d never known.

We went around to places like Tralfalgar Square, where we were told that the grand lion statues lounging in the center were created by a man who’d never seen a lion before and therefore used his pet poodle as a model for the rear ends of the lions (delightful tidbits like these are exactly why I love taking organized tours – I can look at things on my own, but where else would I have learned that lion story?).

We passed St. Jame’s Palace, which I learned is the only operational palace in England. St. Jame’s is where the Queen does all her work; places like Windsor and Buckingham are just for living in – did not know that!

We went along to Buckingham Palace, and this is where Chris got super excited because he saw that the flag was flying at Buckingham which meant that the Queen was in. The London guards were also on duty, with their fancy hats, and I learned that, depending on what type of feather (or lack thereof) is in their hat, it will tell you what regiment they’re from. I didn’t work up the nerve to take a picture with them myself, but I snapped a few of them.

As we stood in front of Buckingham, we noticed the flag was being taken down. Chris told us this meant the Queen was heading out. We waited around a bit to see if a fancy car surrounded by motorcycles would pass by, but it didn’t, so we moved on.

We ended things off by Westminster, near the Parliament buildings.

I had such a great time on the tour, I decided to join Chris on his evening tour, the Grimm Reaper tour, to experience London’s more spooky and outlandish side. A girl I met at the end of the free tour joined me. Shiri and I became fast friends, and we did several more things together in the days to come.

The Grimm Reaper tour began outside the Tower of London, giving me my first look at the spectacular fortress that I would be exploring in less than 24 hours (tune in next Tuesday to find out how that went – spoiler alert: it was AMAZING). I also got a glance at Tower Bridge, which I had mistakenly thought to be London Bridge.

Evidently I am not the only person to think this. A few years ago, when London was putting in a new London Bridge and dismantling the old one, a city in America bought the pieces, thinking what they were getting was the bridge pictured above (Tower Bridge). Let’s just say they were sourly disappointed when their package arrived.

In its early days, Tower Bridge was also a sight for ladies of the night. The section above is walkable, and was a popular place for prostitutes to strut their stuff. The top of Tower Bridge is now closed to visitors.

The Grimm Reaper tour was full of spooky tales. We had a lengthy discussion over Jack the Ripper and his victims, treading the locations of their murders. There were hauntings of the Tower of London divulged, such as an invisible specter that haunts the Salt Tower. Neither animals nor the Yeoman guards will go near the tower, a guard who once entered being suddenly strangled by an unseen sight.

But by far my favourite story of the night was that of the Chicken Lady, otherwise known as the Countess of Salisbury, Margaret Pole. The esteemed and elderly Countess was condemned to beheading, not due to anything she did but because Henry VIII was angry with her son, who was living in France at the time. Since the King couldn’t get her son, he went after her. At first she met her fate with dignity. But then as she was led onto Tower Green, she decided screw this, I didn’t do anything wrong. So she tried to run. Now, she’s on Tower Green already, there’s no where to go, she’s completely walled in. But she tries to run anyway. The axeman watches her for a bit, thinking really, lady, really? Then he starts to run after her. And swing his axe. So there they are, a spunky old lady and an increasingly irritated executioner, running circles round Tower Green. The executioner continuously swipes his axe after her; sometimes he misses, sometimes he nicks her, but she keeps on running, skirts gathered in hand, frantic, like a chicken with its head cut off – quite literally in a matter of moments. It takes 11 hacks of the axe before the Countess is down, her head rolling away from her.

And on that gruesome note, I’ll leave you. Don’t worry, I have plenty more beheading stories where that came from – just wait until you hear Anne Boleyn’s!

Travel safe and keep your head about you!