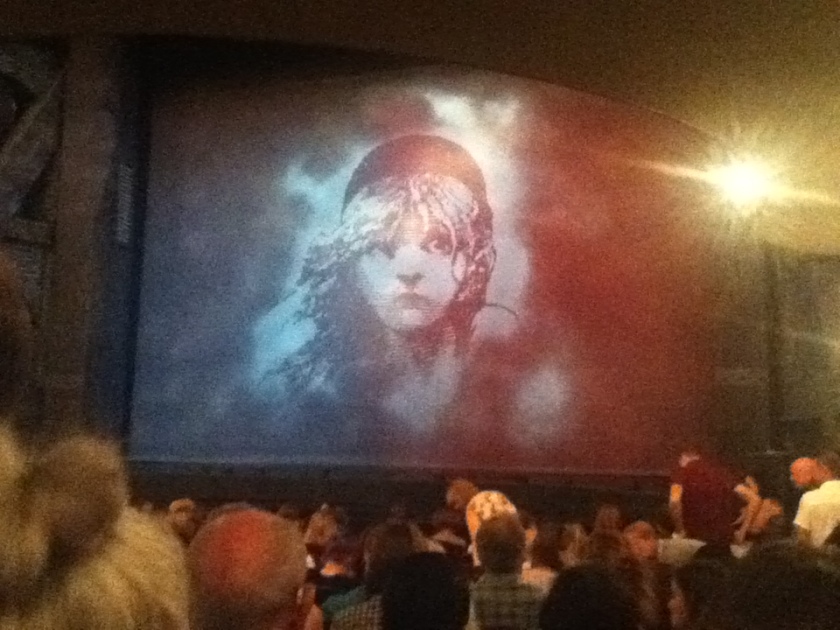 I had the pleasure of getting to see two more shows while I was in London. I went to see Les Misérables and The Phantom of the Opera. I don’t think I’ve ever been quite so impressed with the stage as I was seeing those two shows. They had the most unbelievable effects and props. Special effects in movies are no longer impressive. Special effects in real life – now that’s impressive!

I went to see Les Mis first. It was incredible. That show put the movie to absolute shame. I was never very impressed by the movie, so thank goodness I decided to see it performed live because it is a million times better on the stage and I now have a good impression of this beautiful story.

The songs are performed beautifully and the stage work is just exquisite – humongous set pieces that move seamlessly on and off the stage, gun shots getting fired, smoke billowing, the works. Incredible.

As blown away as I was by Les Mis, I was left absolutely dumbfounded by The Phantom of the Opera. I was legitimately flabbergasted by some of the tricks they pulled off. It was like watching a magic show. There was one part where the Phantom covers himself with a sheet, and then like thirty seconds later the sheet is pulled off and he’s disappeared!

The Phantom was a great magician. He’d had fireballs flying from his sleeves, he’d appear out of nowhere in a scene that had been going on for a while. Plus the stage! Oh my goodness! The scene where the Phantom takes Christine down into his lair under the theatre took my breath away. They’re walking along a gangway that’s floating above the stage and it gets lowered on one side so that’s it at an angle and they walk down it, then it’s lowered on the other side, and so on and so on. And as they move down, these giant candelabras come up from the floor, lit up and shining, and mist is rolling across the stage and then there’s the Phantom and Christine in a boat and he’s rowing her across the stage through the mist and candle light. Amazing!

These was so much great stage movement like that. It’s all the more impressive when you think about how much work goes into making it all look effortless and the fact that it’s live. It makes me miss performing on the stage.

Lis Mis and Phantom of the Opera are both incredible shows and so worth seeing if you ever get the chance, especially on a London stage, the shows’ originating stages.

You’re probably thinking, how on earth did you afford to see TWO Broadway shows in London? My answer – Leicester Square. When in London, and you’re looking to see some shows, but can’t afford the regular ticket prices, head to Leicester Square. They have box office tickets on sale for shows happening the day of or the next day at extremely discounted prices. And the seats are good too! I was really happy with where I was located for both Les Mis and Phantom.