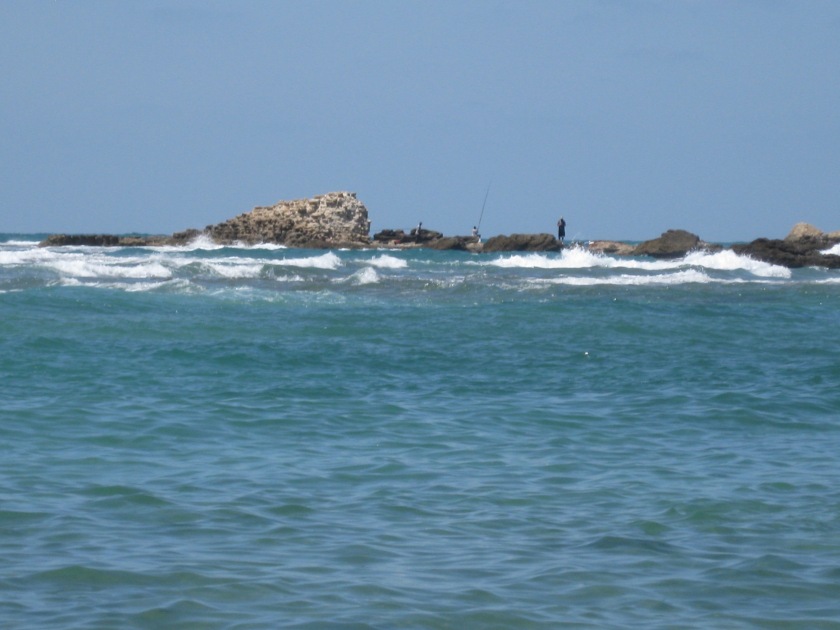 From sun tanning, to swimming, to lounging some more, it was a glorious day of relaxation – much needed after all the hiking and walking around we’d been doing the previous eight days.

The day earlier we had spent our time in Tel Aviv, being shown the sights of the bustling city, although much of it is a blur to me, so beyond being able to say I’ve been to Tel Aviv, I have little else to make note of.

But back to the Mediterranean.

A sun-kissed beach, blue blue water – the warmest water I have ever swam in – it was pure bliss. Swimming in the Mediterranean feels a bit like splurging on a spa day, the water is so pleasant and warm (although from future experiences, I know the temperature of the water will depend on the coastline it’s attached to and probably the time of year – while the Mediterranean on Israel’s end no doubt stays warm all year, when I dipped into the Mediterranean while I was in France in early March, the water was frigid and much less pleasant).

We were having what was called Yom Habo Day (or Yom Habonim Dror, literally Habonim Dror Day). The camp I went to is connected to camps all over the world, the organization being called Habonim Dror. MBI (the trip I did to Israel) is a month-long trip for the campers, aged 16, from the camps across North America. The camps from the other countries also do trips like this. Yom Habo Day is the day that every single camper, who goes on their Israel trip, from every single camp across the world gets to meet. So you can imagine how crazy that beach must have been with all of us running around. But it was pretty cool getting the chance to meet people from all around the world.

That was also the day I walked into a gun, which was, not surprising, rather alarming. I’m from Canada. People in Canada don’t walk around carrying guns. People in Israel do. Not everyone, but more people than me, a Canadian, would expect. And I don’t just mean handguns, no, giant freaking rifles. I was quite shocked my first few days in Israel (different cultures, that’s for sure), but, much like the heat, eventually you kind of get used to it, which is strange to say. Most of the people you saw with rifles were clearly in the army, but not all of them. Even the medics that accompanied us carried huge freaking rifles with them. Not once did I ever feel like I was in danger when I was in Israel, in fact I felt more safe than I do sometimes walking by myself in my own city, but it was nonetheless strange seeing so many guns everywhere. And it was certainly unsettling walking into one – I’m someone who’s never touched a gun before or since. I was in the line for food when I backed up to get out of somebody’s way and backed up straight into a rifle someone had leaning against themselves. Then I backed away slowly, feeling a bit like a scolded puppy, even though the person didn’t even notice.

A couple days later we returned to Tel Aviv and went to a park where they were holding a huge outdoors music concert celebrating Tel Aviv’s 100th birthday. I mostly remember them throwing giant balloon-type balls into the audience.