Our first official day in Edinburgh was filled with the stories of the city, from the writers who found inspiration there to the grave robbers who startled a corpse. Let the exploration begin!

We started the day off with the Sandemans free walking city tour. I’ve mentioned the Sandemans tour group before, taking tours with them in Barcelona, Amsterdam, London, and now Edinburgh. These are still some of my favourite tours with some of the best tour guides I’ve ever had, and once again, Sandemans delivered again with not one but two amazing tours to blow us away on our first day.

Our guide’s name was Dave, and he was excellent. He had excellent stories to tell and the way he told them was like watching a theatrical performance. Stunning, hilarious, and, as always, informative.

The tour started on the Royal Mile, which is the street that leads from Edinburgh Castle down to Holyrood Palace. Here, we passed by Deacon Brodie’s Tavern, and learned about the man behind the name. He was a man of two personalities – publicly, he was known practically as a saint, but privately he was all about gambling, drinking, and the ladies. He lost so much money he went severely, and dangerously, into debt, owing people you do not want to have to owe. So what’s a guy in debt to do? Well, Deacon Brodie decided to rob people’s houses. Because of his position, he had the keys to several well-to-do places around the city, so he made copies of those keys and began to steal from their homes.

People were in full panic over this. Nobody knew how the thief was getting in and out, doors weren’t broken at all; it was like a phantom was slipping into people’s houses at night – which is exactly what they thought was happening. They had to get to the bottom of these house invasions quickly, so who should be put in charge of solving the crime, but Deacon Brodie himself! Because of this, he got away with it for a long time, but he was eventually found out and caught. The split personality of this important man caught the interest of another important man, several decades later – and thus “The Strange Case of Dr. Jekyll and Mr. Hyde” was born. 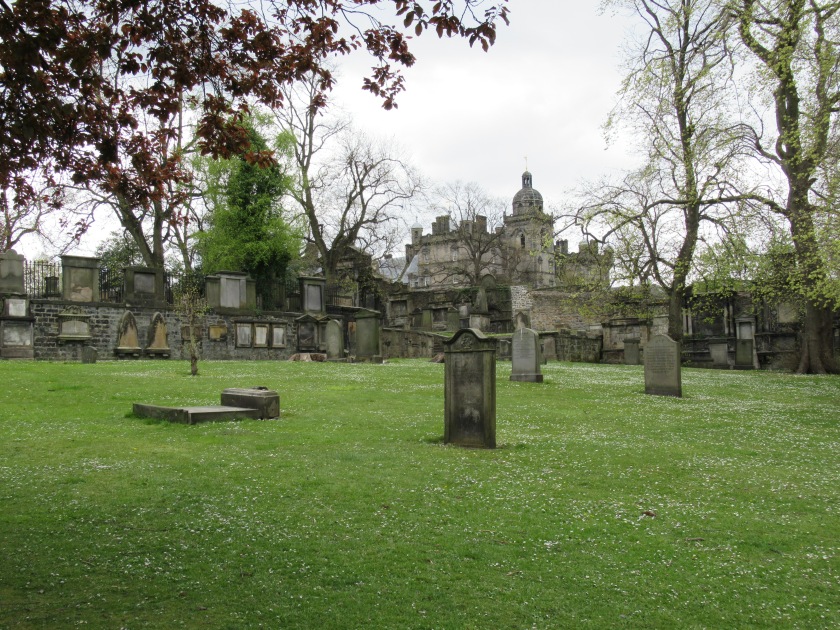 We arrived in Greyfriar’s Cemetary, another place of literary inspiration. Here, the only section of the old city wall that used to surround Edinburgh is still standing – Flodden Wall. 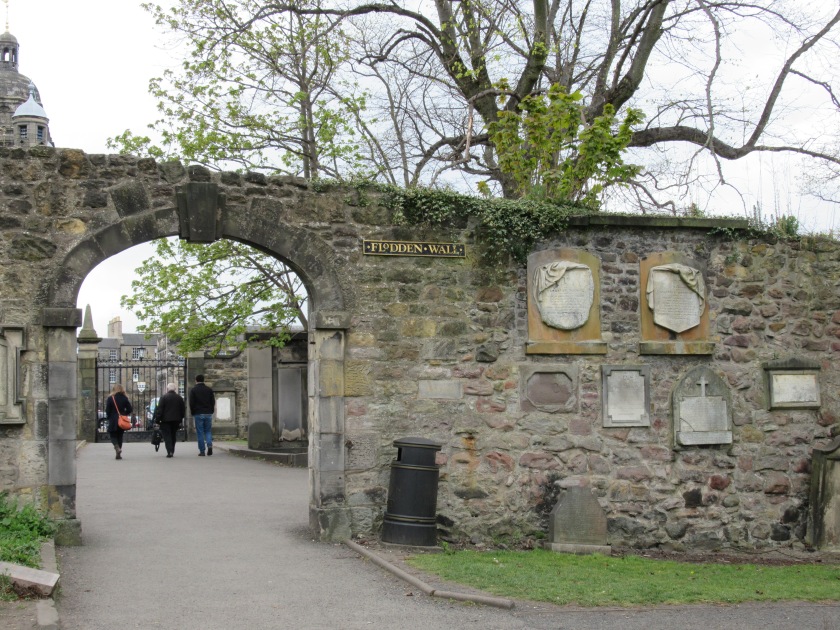 Also here was where J.K. Rowling is said to have walked when struggling with writer’s block, and several names on the gravestones scattered around the joint may sound familiar to the Potter fans among us – McGonagall, Tom Riddle…

There’s also the tomb for George Mackenzie, or Bloody Mackenzie, who was a torturer in his time. Those who dare to enter his tomb claim to suffer from fainting, awaking to discover long claw marks running down their cheeks.

That’s just a snippet of the stories we were told on our first tour. Once that had finished, we wandered around on our own for a bit, exploring the nooks and crannies and popping into some of the shops.

Our second tour began in the evening, the Dark Side tour, run by Sandemans, and to our pleasure, also led by Dave. This is the tour you want to take if you want to hear about all the gruesome, dark stories of Edinburgh – which, of course, we did!

I think my favourite story of the night was the one about the discovery of the Arthur’s Seat coffins. Arthur’s Seat is an extinct volcano in the middle of Edinburgh. In 1836, a couple of boys were out hunting for rabbits along the hillside when they came across a blocked off cavern. Inside, they found 17 tiny coffins stacked on top of one another. When I say tiny, I do mean that; they were probably only a little longer than my index finger (we saw them later when we went to the National Museum of Scotland). Inside these coffins, it was later discovered, were little wooden dolls (pictures here!).

I latched onto that story so fast. It’s super creepy and a big mystery, and I’m definitely storing the idea of that discovery in the back of my mind, to inspire events in a future story.

Nobody’s quite sure where the coffins/dolls came from, who put them there, or what they’re meant to stand for. Several theories have arisen. Are they something to do with witchcraft? Maybe they’re meant to represent soldiers that never made it home to be buried by their families, and the dolls were a way to help the grieving families have something to bury at least. Some people believe they have to do with the victims of Burke and Hare.

Burke and Hare were infamous murderers in Edinburgh in the 19th century. Grave robbing and the selling of bodies to the surgical school was a huge thing. Burke and Hare took it one step further by not waiting until people had died to sell them to the school. They killed 16 (known) victims, which is why some people think the Arthur’s Seat coffins were some kind of shrine to those victims (which only raises more questions), and when they were eventually caught, Hare got out with a light sentence of two years in prison by ratting out Burke and blaming him for everything. Burke was hanged, and via the karma gods, his body was then sold to the medical school. People paid to see the body, and to poke it with knives. Journal covers and coin purses were made out of his skin. Eewwwww.

When we were in our second cemetery for the evening, we were told about the tombstone of Ebineezer Scroggie – A mean man. Charles Dickens saw this, and thought the inscription was so great, he based an entire character off of it (any guesses as to which character that was?). When he later returned to the cemetery, years later, he discovered that he had read the tombstone wrong – what it really said was “A meal man” to indicate his involvement in the grain business. That is fantastic. This. This is the kind of tidbit I love hearing.

The last story I’ll share with you is the story of the two grave robbers who dug up the body of a rich woman. When they dug up her body, she was covered in jewels and fine, expensive clothing. They couldn’t take any of these things, because then it actually would be considered stealing and a crime, nor could they hand over the body like this, the medical school wouldn’t accept it, so they started to take everything off her. But when they reached her hands, they couldn’t get her rings off. So they started sawing off her fingers. One…two…three. On the third finger, the woman sits up screaming, and, understandably, scaring the Dickens out of the two grave robbers, who run hollering from the cemetery. Turns out, the woman wasn’t actually dead, but in a super deep coma, and the trauma of having her fingers sawed off woke her up. She ended up living for ten more years after that. Still trying to decide if she’s the luckiest woman in the world, or the unluckiest.

So that was our first day. A great way to start off the trip, if I do say so myself – what could be better than ghost stories, author mishaps, and mysterious coffins? 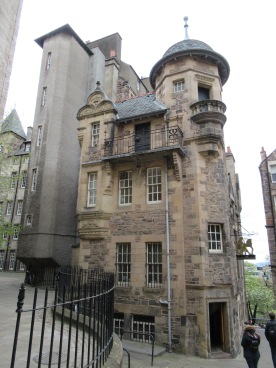 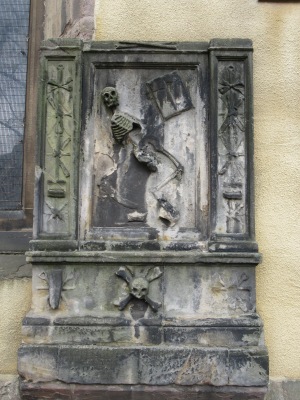 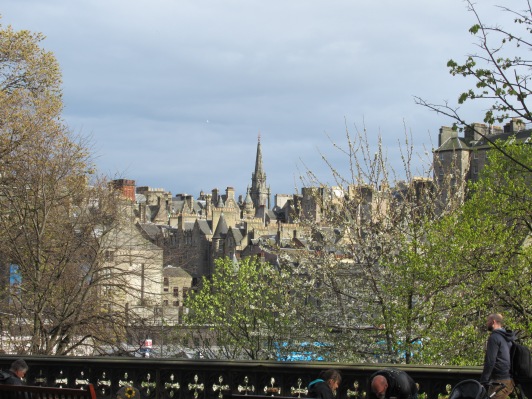